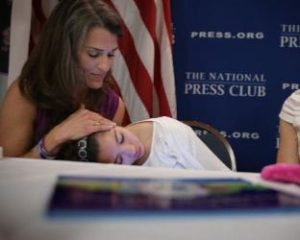 This article is from Forbes, posted here for educational and archival purposes.

Parents of severely autistic children are turning to medical marijuana for relief. After seeing the results that epileptic children experienced, these desperate parents are beginning to wonder if it will work for them too. There are very few studies linking cannabinoids as a treatment for autism, but that isn’t holding these parents back. Most figure they don’t have anything to lose.

Autism is a neurodevelopmental disorder known for its ability to impair communication and social interaction. Some children are able to function well with various treatments, while others suffer with the inability to speak and self-harming behaviors. According to the Center for Disease Control and Prevention, 1.5% of the children in the U.S. are diagnosed with autism as of 2014, so this is a huge patient population.

They are using CBD or cannabidiol, which can be derived from marijuana and hemp plants. Marijuana has higher levels of THC than hemp, which causes the “high” effect, while CBD contains the medical properties. Hemp has more CBD than marijuana, but less of the medicinal compound within CBD to have an effect. Marijuana plants can be bred to have higher levels of CBD and then those flowers are used to create CBD oil. It can also be extracted from hemp plants…..

Another mother, Mieko Hester-Perez founded The Unconventional Foundation for Autism when she discovered that medical marijuana helped her autistic son. The story is similar to the famous Charlotte’s Web cannabis strain, so named after the little girl named Charlotte who’s epileptic seizures were dramatically reduced after using this particular breed of cannabis. The story became famous on a ’60 Minutes’ program. This version is called Joey’s Strain and it was created by Kushman Genetics for Ms. Perez’ son Joey. The website cites a Dr. Rimland and his editorial piece, ‘Is Marijuana a Valuable Treatment For Autism.’ However, this article contains no references to any studies and is only a collection of anecdotal stories.

More recently, Kalel Santiago, a child with autism so severe he wasn’t able to speak, started speaking his first words after simply spraying hemp oil in his mouth twice daily according to Dr. Giovanni Martinez, a clinical psychologist in Puerto Rico. Dr. Martinez said, “He started using the product three weeks ago. He was a full non-verbal patient. He only made sounds. The only change in his treatments was the use of CBD.” The parents pursued the treatment on their own. Dr. Martinez has also been doing his own research on CBD and shared it with the parents. “I’m very impressed with the language he has acquired,” said Dr. Martinez. Dr. Martinez noted that when Kalel couldn’t communicate, his behavior became bad as he acted out due to his frustrations, but by opening up his communication abilities his conduct has improved. “He laughs every time he hears his voice,” said Dr, Martinez.

The issue is that few doctors will recommend this is as a treatment because there is little scientific research to base it on. Unlike epilepsy, where references to cannabis treatments dated as far back as 1843 when Dr. William O’Shaughnessy wrote, “In Cannabis, the medical profession has gained an anti-convulsive remedy of the greatest value.’ There is little research on autism and cannabis. Scott Hadland, MD, MPH, John R. Knight, MD and Sion Kim Harris, PhD of Boston Children’s Hospital write, “Given the current scarcity of data, cannabis cannot be safely recommended for the treatment of developmental or behavioral disorders at this time.”

A 2013 study by Dr. Siniscalco found signs to suggest compounds found in cannabis could help to treat autism, writing, “Our data indicate CB2 receptor as potential therapeutic target for the pharmacological management of the autism care.” Another study published in 2013 and dating back to 2011 by Dr. Csaba Foldy at the Second University of Naples associated with Stanford University Medical School is often cited. In the study out of Stanford University first author Dr. Foldy wrote, “Endocannabinoids are molecules that are critical regulators of normal neuron activity and are important for many brain function. By conducting studies in mice, we found that neuroliginb-3, a protein that is mutated in some individuals with autism, is important for relaying endocannabinoid signals that tone down communication between neurons.”

Piper Jaffray analyst Josh Schimmer who covers bio-tech companies has also made the connection. He noted that some forms of autism share similar features with epilepsy. He writes, “It’s possible that some children have sub-clinical seizure activity that result in developmental disorders, and there are also extremely exciting anecdotes of autism patients who thrive after CBD therapy.”

The Autism Research Institute starting connecting the dots too. They found that children with autism that used marijuana experienced an improvement in symptoms like anxiety, aggression, panic disorder, tantrums and self-injurious behavior. Martin Lee, author of Smoke Signals and founder of Project CBD said, “There’s substantive body of pre-clinical research and some anecdotal stories. There’s also some research from GW Pharmaceuticals on psychiatric disorders. It’s not autism, but there are overlapping issues.”

The lack of research isn’t holding back the grassroots efforts. There are numerous pages on Facebook that have created autism and cannabis communities. There are several websites devoted to the idea. There are doctors that are writing about the stories they have heard. The one thing lacking is multiple scientific studies.