This article is share here from Yahoo News for educational and archival purposes: 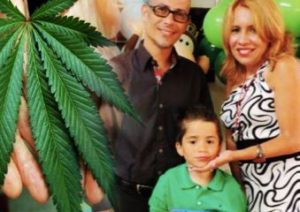 Though Kalel Santiago of Puerto Rico is only 9 years old, he’s already endured some adult-level struggles. At just 10 months, he was diagnosed with the rare childhood cancer neuroblastoma, and spent more than two years undergoing surgery, chemotherapy, and radiation treatments. Then came the next diagnosis: severe, non-verbal autism.

“While he was in the hospital, we noticed he didn’t speak at all and had some behavior that wasn’t right, like hand flapping, and walking on his toes,” his father, Abiel Gomez Santiago, tells Yahoo Parenting from the family’s home in Aguada. “But we waited until he was 3 and cancer-free to look at his behavior.”

He and his wife Gladys — also parents to two older boys, now 18 and 20 — did a cram course in educating themselves on autism. They tried various schools and therapies, and eventually found impressive success with a unique surf-therapy school near their home. Then, through an April fundraising event for that program, the Santiagos happened upon a treatment that would quickly change their lives: hemp oil, rich in the compound cannabidiol (CBD), which has been shown, at least anecdotally, to dramatically ease symptoms of both epilepsy and autism.

They took home the tiny sample bottle of spray and began giving their son twice daily doses, as directed on the label, right into his mouth. And the results, they say, were startling: Kalel started talking — in just two days.

“He surprised us in school by saying the vowels, A-E-I-O-U. It was the first time ever,” Abiel says. “You can’t imagine the emotion we had, hearing Kalel’s voice for the first time. It was amazing. The teacher recorded him and sent it to my wife and me and we said well, the only different thing we have been doing is using the CBD.” Soon thereafter, he adds, Kalel started using consonants to connect his sounds. “He said, ‘amo mi mama,’ ‘I love my mom,’” Abiel says. “I don’t know how to thank [the CBD oil makers].”

Still, what Abiel and Gladys saw that day in the Hemp Health sample was neither threat nor rip-off, but a tiny glimmer of hope. And so far, they say, the results have been nothing short of startling.

“He’s been connecting — like he’s awakening to seeing the world,” Abiel says, noting that they have kept up the treatments for just over a month now, and that Kalel continues to make improvements. “He’s looking you in your eyes, he’s been trying to say different things and imitate what we are saying. He’s saying ‘uncle,’ ‘aunt,’ the names of my two kids. It’s something amazing that I cannot explain.” (Regarding the product’s legality, the dad notes, “If we had to go somewhere else to get it, we would. I’d go anywhere.”)

Kalel’s response has shocked others, as well, including his teachers, and even the CBD oil company