Article: WHAT ARE CANNABINOIDS?

Below are selected quotes from an article titled: WHAT ARE CANNABINOIDS?

The media is continually reporting various aspects of the medicinal efficacy of cannabis. It helps cancer patients endure the wrenching nausea of chemotherapy. It allows multiple sclerosis sufferers to enjoy an afternoon in the park without their wheelchair. It delivers significant seizure reductions to children with epilepsy so they can attend school and have a semblance of a life.

Cannabinoids: Primary Chemical Components
The primary chemical components of cannabis, which translate into the effects felt and deliver value to patients, are the beloved cannabinoids. Cannabinoids are simply chemical compounds that cause reactions when they enter the body via the lungs as smoke and vapor or through the stomach as edibles [or through the skin via sublingual ingestion].

They can even permeate the skin, as is the case with cannabis topicals. The path via smoking and vaporizing is slightly different than that of cannabis when eaten. The effects of ingested, or eaten, cannabis are typically stronger and last longer because it is processed by the stomach and liver before it enters the blood stream. This process actually produces slightly different molecules. When metabolized by the liver, THC changes from delta-9 THC into 11-hydroxy-THC.

Cannabinoids were first discovered in 1940 by Roger Adams in the United States and again in 1964 by Dr. Raphael Mechoulam at Hebrew University in Jerusalem. These special chemicals work synergistically with the human body and, more specifically, the endocannabinoid system. There are more than 111 cannabinoids found within the cannabis plant. This includes the most famous examples, like THC and CBD, as well as more minor players that are found in significantly smaller quantities, like CBN and CBG. There are also variants of major cannabinoids, like THCV and CBDV.

When smoked or vaped, cannabinoids enter one’s lungs and are immediately transferred to the heart, where they’re pumped directly to the brain [and many other systems and parts of the body]. Once in the brain, cannabinoids seek out specialized receptors into which they fit almost perfectly. Technically, this “lock and key” mechanism is labeled a “binding affinity” between the cannabinoid molecule and the receptor site.

Cannabinoid Receptors
There are primarily two types of cannabinoid receptors in the body’s endocannabinoid system: CB1 and CB2. CB1 receptors, found throughout the brain and central nervous system, accommodate the THC molecule. Because they are found in their largest concentrations in the brain, it makes sense that this popular cannabinoid is responsible for euphoria and psychoactive effects.

CB2 receptors, found throughout the immune system and its associated organs, bind with CBD, or cannabidiol, a cannabinoid that delivers no euphoria or cerebral activity.

CBD has, however, been shown to deliver great medical efficacy, including reducing seizures and shrinking tumors for both children and adults with severe conditions like epilepsy and cancer. 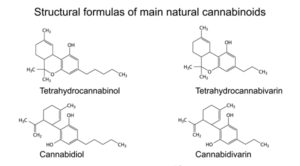 There may be additional receptor types that have yet to be discovered. The Schedule I status of cannabis, which has resulted in a gross lack of cannabis research in the United States, has stifled the scientific progress necessary to learn more about cannabinoids, the endocannabinoid system, and the delicate interaction of the two (something called the entourage effect). The stagnation of Congress on the topic of cannabis research has resulted in patient suffering, an opiate addiction and heroin epidemic, and rampant alcoholism because those who self-medicate in prohibitionist states are not given safe, legal access to cannabis medicine.

However, there is a vast body of foundational knowledge that has been accumulated since 1940 when the THC molecule was first discovered.

The cannabis and medical communities know enough about the effect of cannabinoids to administer CBD oil to epileptic children and THC to Crohn’s patients. Unfortunately, the most important thing known to the cannabis community is that more research is necessary into the sometimes subtle manner in which cannabinoids interact with the human body, including how they buffer and temper each other and how they interact with other special molecules found in cannabis, including terpenes.