Article: How Can Cannabis Help Cancer? 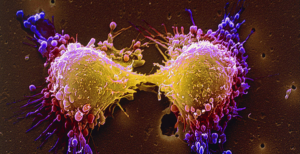 Below is an excerpt from a news article found on leafly.com, Feb 2016:

Cannabis contains at least 85 different types of cannabinoids, the active chemicals that create drug-like effects throughout the body. The impact of these cannabinoids in treating cancer symptoms as well as the side effects of cancer therapies is so favorable, cannabinoids are synthesized for legal, prescription use. Dronabinol and Nabilone/Cesamet, two synthetic pill forms of THC, are FDA-approved and currently being used to treat nausea and vomiting associated with chemo.

Cannabinoids that are known to benefit people living with cancer include CBC, CBD, CBDa, CBG, THC, and THCa. Cannabidiol (CBD) is known to relieve pain, lower inflammation, and decrease anxiety without the “high” of THC, the primary psychoactive ingredient in cannabis. In Canada, a cannabis extract containing THC and CBD called Nabiximols/Sativex is approved for pain relief in patients with advanced cancer and multiple sclerosis.

According to the U.S. government’s National Cancer Institute, other effects of cannabinoids include anti-inflammatory activity, blocking cell growth, preventing the growth of blood vessels that supply tumors, fighting viruses, and relieving muscle spasms.

NCI also acknowledges that inhaled cannabis is attributed to improved mood and sense of well-being. Studies suggest cannabis can be used for symptom management in cancer patients by preventing vomiting, stimulating appetite, providing pain relief, and improving sleep as well as inhibiting the growth of certain types of tumors.

Other studies leading scientists down promising avenues of cancer treatment include:

Cannabinoid receptors have been discovered in the brain, spinal cord, and nerve endings throughout the body, suggesting cannabis may play a larger role in immunity as well.

Several studies are in progress on the effects of cannabis on cancer in adults, including: