It’s not all about CBD! Find About the Five Amazing Medical Benefits of Cannabichromene (CBC)

There are over 110 cannabinoids that we currently know about. Each with its own value!   While Cannabidiol (CBD) is the most abundant, and most studied cannabinoid, others play a major role on their own. Together, all the cannabinoids work to produce an even stronger benefit, thanks to the Entourage Effect.

The 5 Benefits of Cannabichromene  (CBC) are:

A quote from the article:

“Another early study found that CBC had significant antibacterial properties. The cannabinoid put dreaded E. coli and staph colonies in their place. CBC also had “mild to moderate” anti-fungal properties as well.

This information goes hand-in-hand with a more recent study, which found that CBC and other cannabinoids were as effective as Vancomycin against MRSA.

Cannabinoids are fascinating chemicals. Not only do they have powerful medicinal qualities as individual compounds, but they work together synergistically to create more potent effects. Each and every cannabinoid deserves some time in the spotlight.” 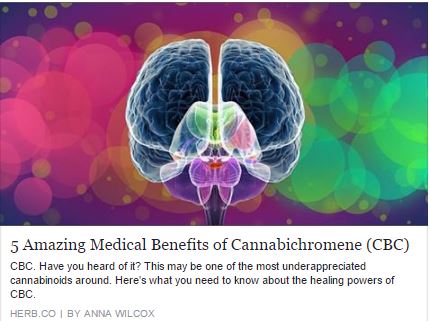