Article: What Is The Endocannabinoid System? 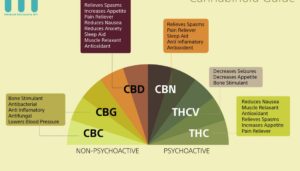 In the past decade, the endocannabinoid system has been implicated in a growing number of physiological functions, both in the central and peripheral nervous systems and in peripheral organs… modulating the activity of the endocannabinoid system turned out to hold therapeutic promise in a wide range of disparate diseases and pathological conditions, ranging from mood and anxiety disorders, movement disorders such as Parkinson’s and Huntington’s disease, neuropathic pain, multiple sclerosis and spinal cord injury, to cancer, atherosclerosis, myocardial infarction, stroke, hypertension, glaucoma, obesity/metabolic syndrome, and osteoporosis, to name just a few…

A primary example of the endocannabinoid system’s role in homeostasis comes from research that has identified an overexpression of cannabinoid receptors in the tumor cells of various cancer diseases, including lung cancer, liver cancer, breast cancer and prostate cancer. Research has also shown that tumor growth can be inhibited and even reversed when cannabinoids such as THC are administered.

Interestingly, research suggests that this defence system is not only useful in treating cancer, but may also be beneficial in the treatment of a wide variety of conditions. Current evidence points to the endocannabinoid system as being a potential therapeutic target for the following list of disorders:

What is the Endocannabinoid System (ECS)?