What is the Endocannabinoid System (ECS)?

Scroll down for some visual aids and videos

The History of the Endocannabinoid System

Across cultures and building through the 19th century, extractions of the cannabis plant were widely used for a number of medicinal purposes. However, following practical prohibition of the cannabis plant in 1937 by the federal government for fear of abuse of its psychoactive properties, medical use and, subsequently, experimentation and study of cannabis were eliminated, stalling the progress of our understanding of the endocannabinoid system and the possible medical effects of cannabis. For nearly 50 years, marijuana fell from popular pharmacopeia and was labelled as illicit in the minds of Americans.

Then the endocannabinoid system was defined in the early 1990’s when Lisa Matsuda announced that her team at the National Institute of Mental Health had first identified a THC-sensitive receptor in lab rat brains. Following this revelation, the National Academy of Science predicted the 1990’s would be the “Decade of the Brain”. It turned out to be true as the following 10 year period would produce “more advances in neuroscience than in all previous years combined” (Lee, 2012).

Since then, scientists have labored to learn as much as they can about the endocannabinoid system, our naturally occurring cannabinoids, and the ways cannabis alters this balance, publishing over 20,000 scientific studies referencing cannabinoids in just the last two decades.

What Is the Endocannabinoid System?

One of the prime questions being raised in these early studies was whether the body produces its own natural equivalents to the previously discovered compounds called phytocannabinoids, like THC and CBD, found in the cannabis plant (Mandal, 2014). The answer turned out to be yes in the form of endocannabinoids, like the two prominent analogs to THC and CBD, anandamide and 2-AG (Pacher et al, 2006). With the understanding that humans create our own cannabinoids, the door to deconstructing their purpose was opened.

Endocannabinoids are created then in response to needs within the larger physiological system and are largely understood to be used for the body’s regulatory functions. Acting backwards on presynaptic cells, they control the volume at which communicating signals are sent. It is in this way that endocannabinoids affect duration and intensity of the wide range of physiological processes under their control.

However, it has been repeatedly noted that, while the endocannabinoid system is linked to a number of important processes and is concentrated in the brain, nervous system, and reproductive organs, it does not affect regions of the brain controlling heart and lung function. This is one of the main reasons that fatal overdoses of cannabinoids do not occur (NCI, 2016).

When the body creates neurotransmitters for the endocannabinoid system, they are picked up by specialized cannabinoid receptors.  These receptors are found in a wide range of physiological regions, such as in the immune system, a number of organs, glands, connective tissue, and most significantly, in the brain. Endocannabinoids interact with these receptors with the goal of helping the body achieve homeostasis, or equilibrium within the body despite outside influences (Alger, 2013).

The endocannabinoid system’s receptor sites include CB1 and CB2 receptor variants, which respond differently to different cannabinoids (Pacher et al, 2006). CB1 receptors are most prevalent in the central nervous system and are linked to modulating stress and anxiety, increased appetite and decreased nausea, immune system balance, and even inhibition of tumors. CB2 receptors are found mostly on cells in the immune system and seem to dominate in fighting inflammation and damage to tissue. Some cells can even contain both types of receptors, each responsible for a different function.

How Does the Endocannabinoid System Affect My Health?

There is also evidence that the endocannabinoid system may aid in the deletion of old memories (Ruehle et al, 2012). The extinction of  aversive memories is important to the progress of PTSD patients and in behavior conditioning for those with chronic anxiety.  By allowing patients to forget painful memories, they can reset their stress and anxiety responses to certain experiences and substitute a more positive reaction.

Cannabis is well known for its ability to increase the appetite. However, because endocannabinoids are used internally for appetite control, inverse agonists to the CB1 receptor can be used to combat obesity by shutting off the body’s desire for food (Pagotto et al, 2005). The opposite can be accomplished by stimulating appetite in those suffering from wasting syndrome and allowing them to gain weight (Kogan and Mechoulam, 2007). Finally, endocannabinoids also regulate metabolism and help control the transfer of energy through cells, ensuring optimal use of the food we do take in.

In today’s world, it is a common reality that the natural cycle of anxiety and physical response cannot be shut off due to constant exposure to stressors. Because cannabinoids affect the body’s glandular response to continued stress to regulate and temper response, the endocannabinoid system has implications for the way modern humans process long term stress and other enduring anxiety triggers (Akirav).

As we continue to learn more about the endocannabinoid system, we will also learn about the potential for the scope of active compounds from cannabis (like THC, CBD, and CBN) to be used therapeutically.

Should I Add Cannabinoids to My Body?

One of the main obstacles to the acceptance and use of cannabis and its active cannabinoids in medicine is the problem of abuse for its psychoactivity. However, this issue does not arise in a number of possible approaches to the manipulation of the endocannabinoid system: such as when an antagonist to the CB1 receptor is applied, when the production or transportation of endocannabinoids is altered, or when a non-psychoactive agonist to the CB2 receptor, like CBD, is used for therapeutic results (Pacher and Kunos, 2013).

Overall, significant research must still be done to better understand the impact of the endocannabinoid system on our overall health and how supplementing our natural endocannabinoid production with plant-based cannabinoids may play a significant therapeutic role in our health. However, extensive early studies show great potential for using this vital system to the benefit of patient health.

To learn more about how individual cannabinoids can be used to promote overall well-being, browse this site to read more on CBD, THC, CBN, and CBC.

Akirav, I. (n.d.) Role of the endocannabinoid system in anxiety and stress-related disorders. Intech Open. Retrieved from http://cdn.intechopen.com/pdfs/17314/InTech-Role_of_the_endocannabinoid_system_in_anxiety_and_stress_related_disorders.pdf

Lee, M. (2012). The Discovery of the endocannabinoid system. Retrieved from http://www.beyondthc.com/wp-content/uploads/2012/07/eCBSystemLee.pdf

The above article was copied with permission from http://medicalmarijuanainc.com/the-endocannabinoid-system-an-overview/


The following is a quote from Wikipedia:

The endocannabinoid system (ECS) is a group of endogenous cannabinoid receptors located in the mammalian brain and throughout the central and peripheral nervous systems, consisting of neuromodulatory lipids and their receptors. Known as “the body’s own cannabinoid system”,[1] the ECS is involved in a variety of physiological processes including appetite, pain-sensation,mood, and memory, and in mediating the psychoactive effects of cannabis.

The wikipedia page discusses the roles the Endocannabinoid system has relating to: 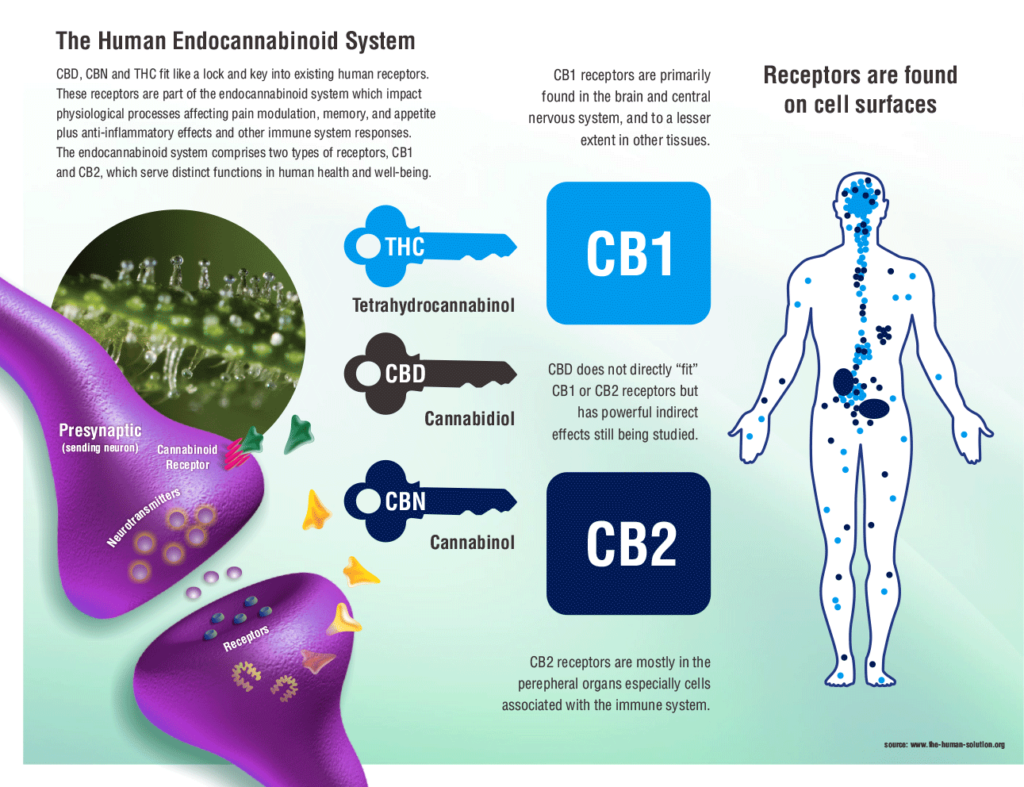 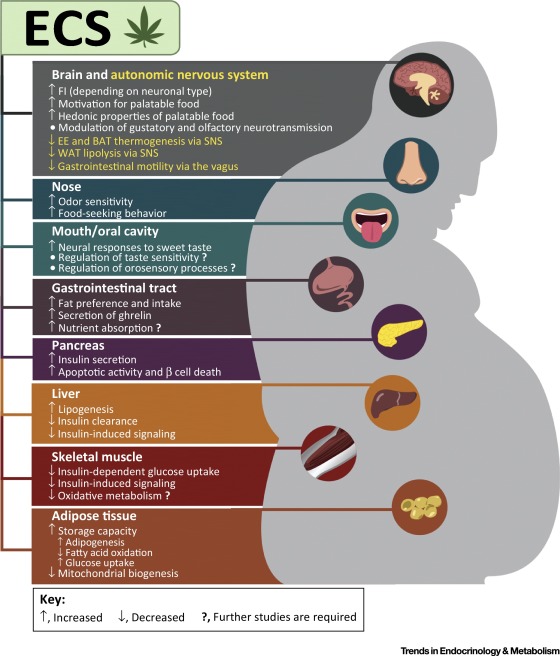 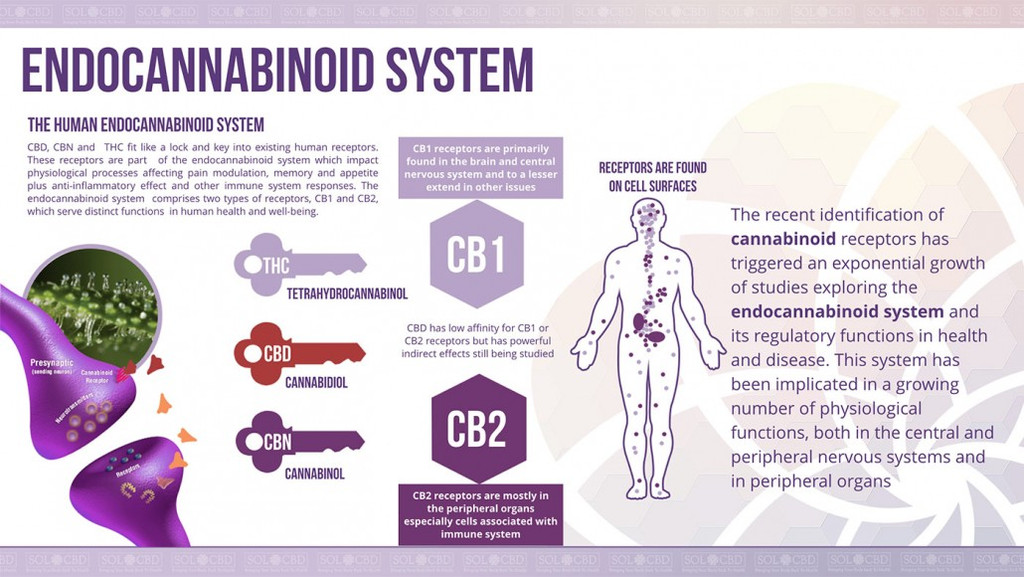 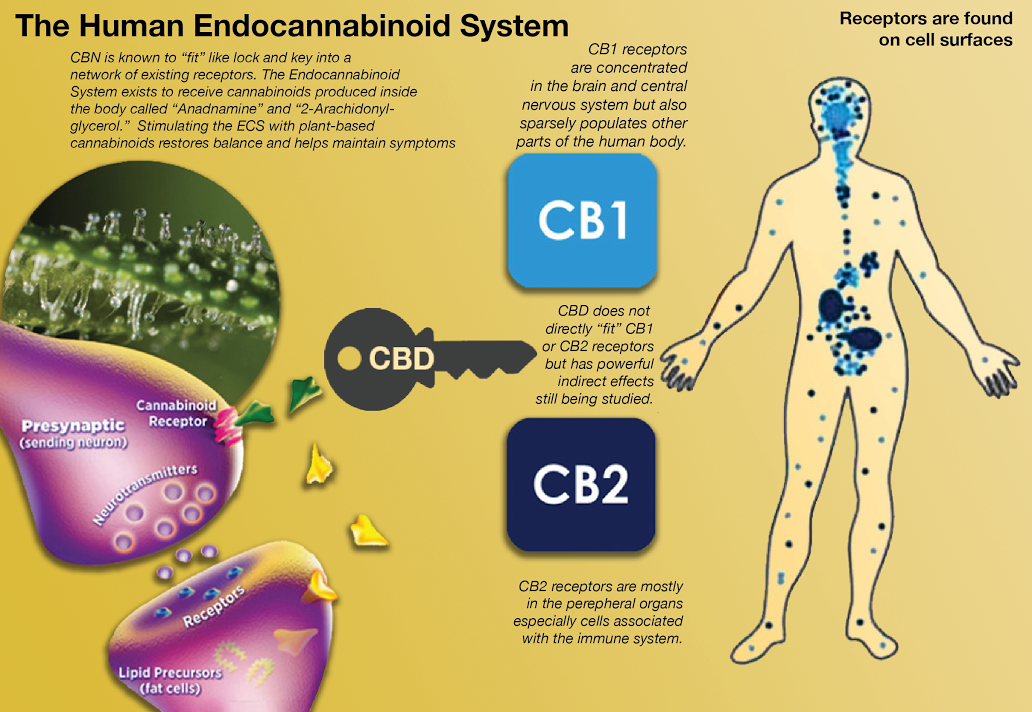 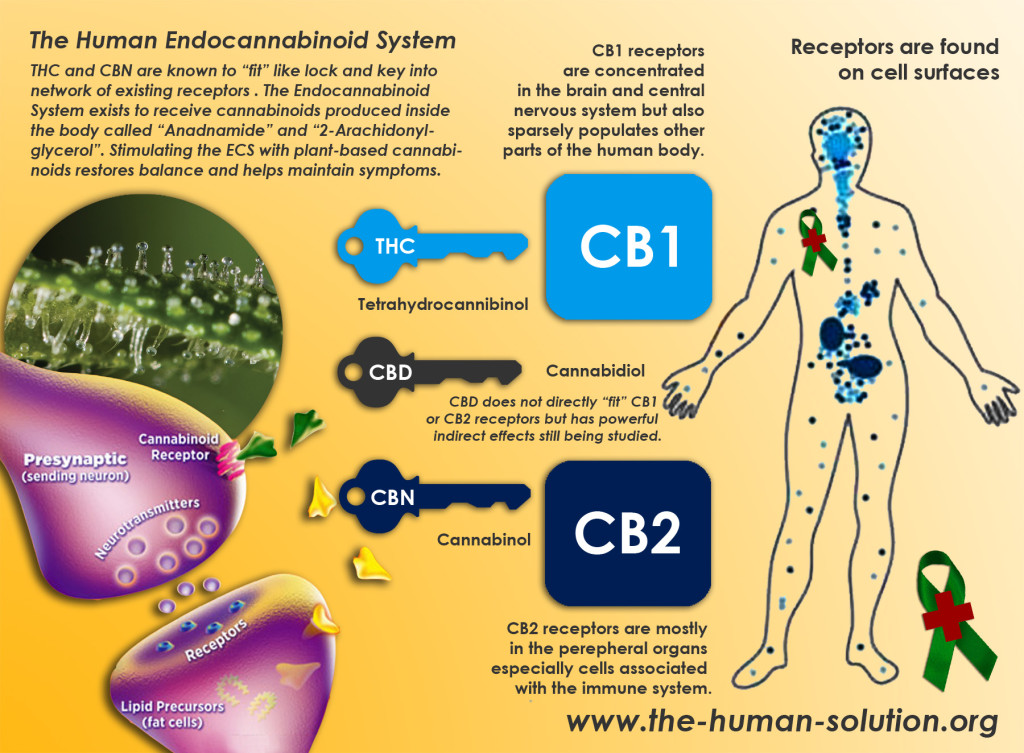 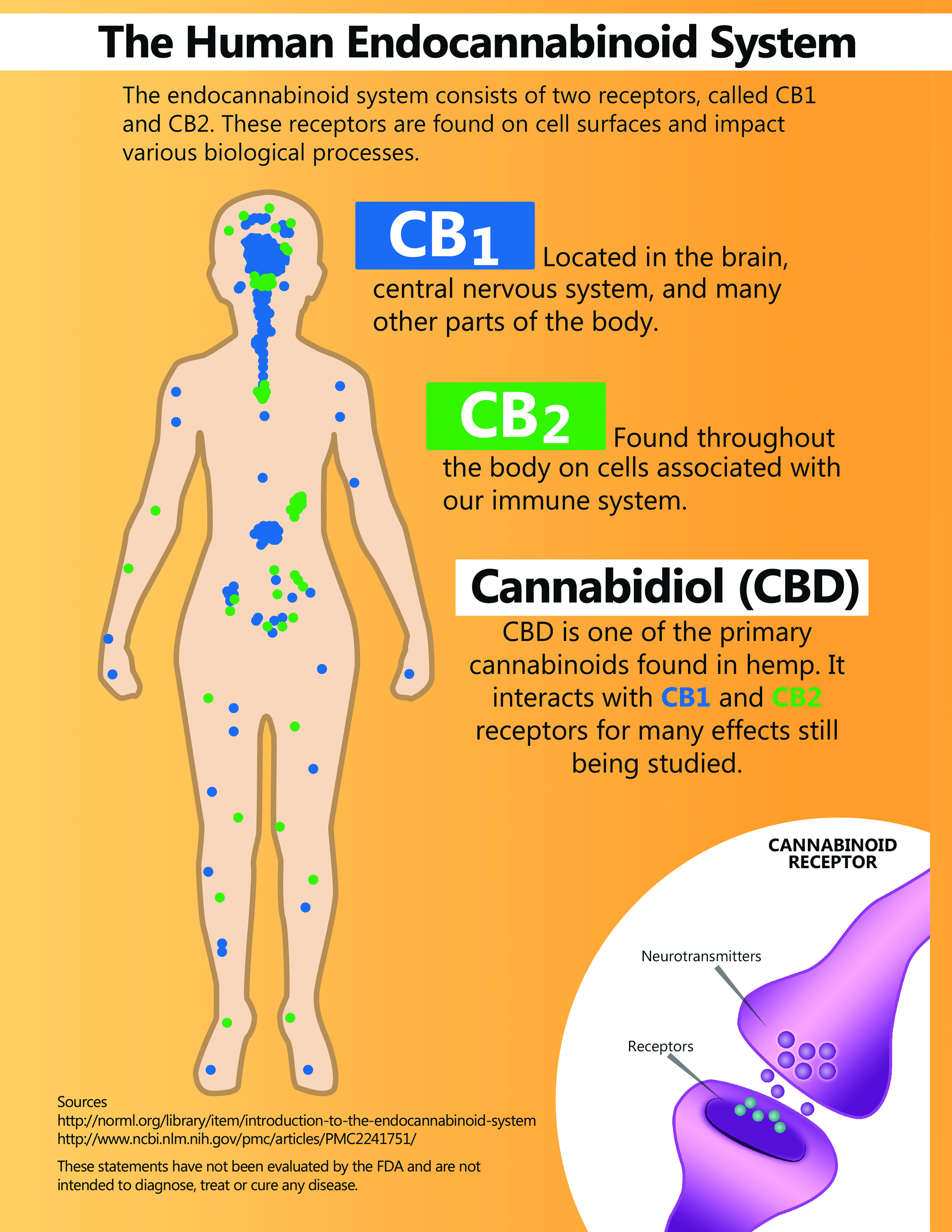 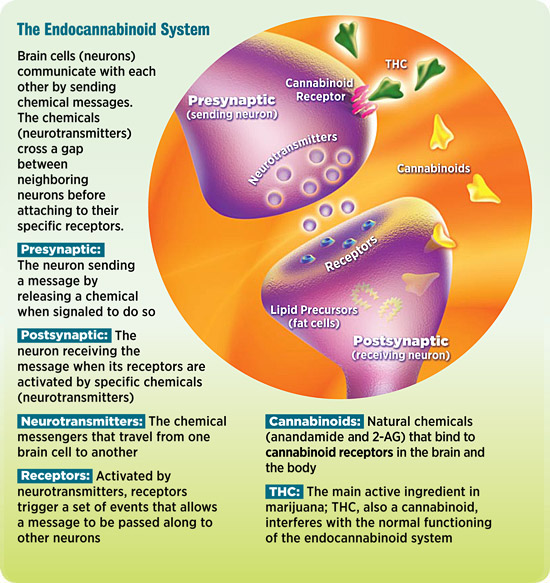 MJNA’s extensive collection of research into the conditions affected by cannabinoids and the endocannabinoid system.